Ever had a heavy, dense gnocchi that sat in your stomach like a lead weight? Met too! My goal is to always eat MORE gnocchi not less. This egg-free gnocchi recipe is not only vegan but makes the lightest, fluffiest version I’ve ever made. Try these extra fluffy egg-free vegan gnocchi and eat twice as much. Ha.

Two important things to remember when making these gnocchi:

This recipe feeds 4-6 depending on appetites and if you’re using as a main dish or an appetizer. I rolled out half for dinner one night, then rapped the dough in fridge and rolled the second half the following night. You will need to add a little more flour for the next day gnocchi but they were just as good. Now that you’ve got these little potato dumplings all ready to go, try making this gnocchi with English peas, mint and parmesan recipe. 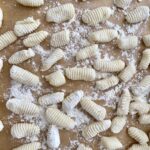 These pillowy vegan gnocchi’s are so light and fluffy you can go back for seconds!

Pip Tip: Baking is the best method for cooking potatoes.

Pip Tip: These are more delicate than some other gnocchi but they are worth the extra care. Be gentle with them.

My Favorite Vegan Dishes in Atlanta

Mayo is for Lovers

What do you think? Cancel reply

My Favorite Vegan Dishes in Atlanta